In the previous post I introduced to you the PID control. In this post and the next ones we will discuss about how it works. This is how I divided the whole thing: one letter for one post. As PID has 3 letters, I let you do the maths (no calculator authorized).

As you can remember from my previous writing, a PID is a coded feedback loop control— sometimes it’s hardware, but most of the time it’s software —, working into a system including at least:

Basically, a PID is a tool used for politely but firmly asking a machine to move or react exactly the way you want, while adapting to its changing environment.

Here is some must-known free vocabulary you will need to go on reading:

The controlled actuator is required to reach a set-point (speed, position, temperature, etc.). The PID uses the process variable and the set-point as a feedback, in the form of an error, to correct the command sent to the actuator so that it can be as precise and fast as possible to get to the set-point.

This is the formula behind the explanation:

This is the complete form of a PID, though you can use a P, a PI or a PD if you consider that it’s enough for your kick-ass robot application.

Here, the letter P stands for proportional. We then chose a simple coefficient KP. It is a value that is multiplied by the error, and that’s why it’s called like that:

And that would be the only thing you must remember for the proportional part. In a mathematical form, it looks like that:

And, if I only want a P command instead of a PID command:

Exchange on your PID control projects and meet our community directly on Discord: Join our Discord

Here are the simplified steps of the action of the proportional. I chose, what a surprise, the example of a DC motor which directly drives a propeller — i.e. no reduction involved. In this example you want to control the speed of the propeller:

Note: the speed value reached by the motor and read by the sensor (process variable) can sometimes overcome the set-point’s value, resulting in a change of sign of the error. This results in an overshoot. 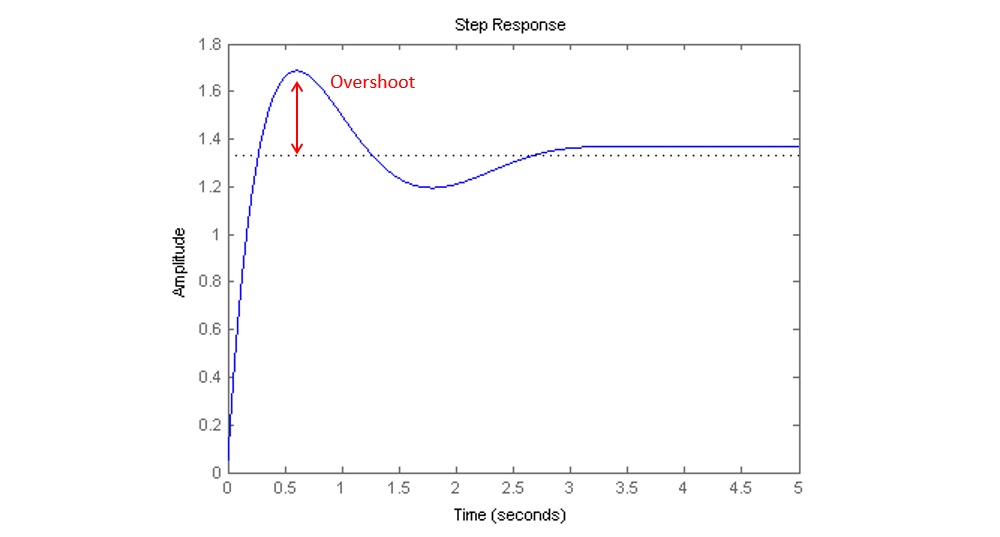 At this point, it’s important to note that this example is only about the speed control of a DC motor with a fixed output’s weight. If the motor’s job is about lifting and positioning various weights (which is not a speed control but a position control), a P command won’t be enough anymore. We will see that on the next posts.

Getting back to the subject, what the KP value really does on the system?

The effects of P

Viewed under this angle, the KP value can be considered — even if it’s a simplified consideration— as a direct strength value, because it gives stiffness to the command.

Also, people usually use to view proportional command as a direct action in the present, like the weight of an object acting on it. If I talk of present, maybe I will tell you some things about past and future later… We will get to that on the next few posts.

The static error of P

There is a drawback of using only proportional: in the previous figure, you may have notice an offset at steady state. But while using the proportional part only of a PID, i.e. I and D are null, a constant difference between the set-point and the process variable appears at steady state. It’s called static error or steady state error. 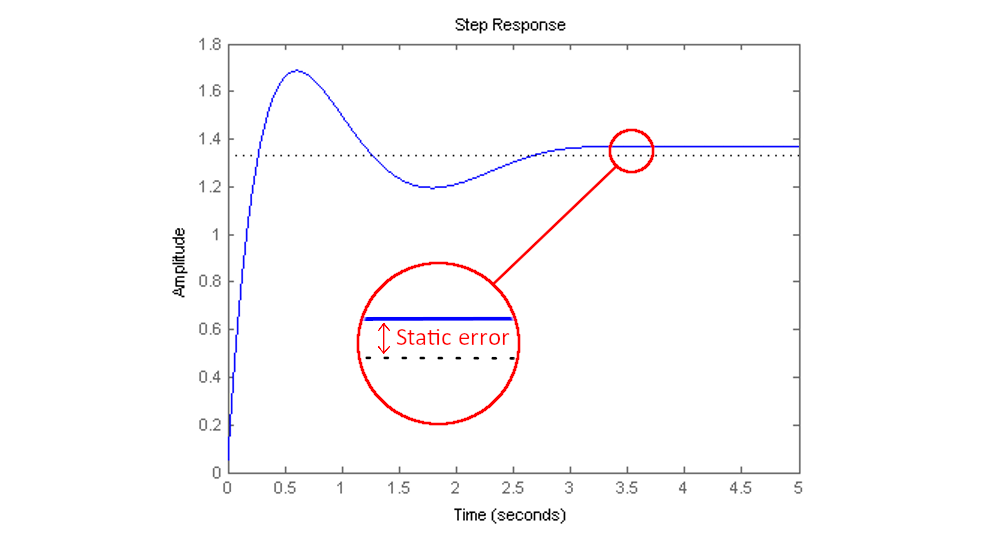 Spoiler alert, an integrator will resolve this static error in the next post.

The goal now is to tune your KP value in order to have the correct desired response of your system (which is your motor, in this example). It can be done manually, which consists in trying different KP values in the command to find the one that makes your motor respond like you want.

Or you can write a kick-ass program so that it does that on its own while you go take a nap.

Although a simple P command can make the job according to what you want to do with your system, keep in mind that sometimes a PI, a PD or a PID are required for the different robotic applications. These are the subjects of the next posts.

Follow the guide and read the following post where we will talk about Integral, the I in PID.